On Tuesday which is one of my favorite days, I have a few friends come over to sew and we chat away. I actually got to do more sewing that day don't now why, maybe I talked less.Lol.............Must tell you, my eldest daughter says to one of my friends Judy, "come on sit, sit please" so she can sit next to her and play with her pins and cottons. We say we are training her to be a Quilter( at a young age - 2 and 1/2 yrs old),she so loves fabric and that already, and knows how to hold the pins without hurting herself.
Why not I started young with a love of fabric and stitching.
Wednesday has been uneventful with me just doing loads of housework.
On another note while blog surfing instead of sleeping, I stumbled onto Simplify and there is a giveaway, if you'd like to visit tell her I sent you.
Must sleep now,
Hugs to you
Posted by Dawn at 10:29 PM 1 comment:

The weekend is almost over and we have had a great time as a family. Friday being Anzac day - a day to remember and honor those men and women who went to war for the benefit of our freedom.
This is a picture of my girls as they played with the peg bucket - its amazing all those wonderful toys that can be bought and children still like to play with everyday items - I like it like that - I actually think children become creative

that way!
We had visitors over for a BBQ in the afternoon and had a great time, Hubby cooked the steak and snags as the children played and my girlfriend and I made all the salads ( I am not that creative in the kitchen, so find it hard to make lettuce look attractive). As we had eaten lunch late we had an easy tea, hubby then went into the shed to do some stuff - I don't know what I am not supposed to look in the shed, thats mens domain, lol................

and I had time to catch up on my Baby Jane blocks, as well as finish the bag I was making for my swap,
this is C3 Rayelle's Fence 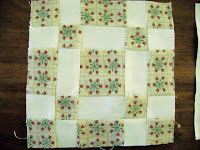 and this is B4 Chris's Soccer Field 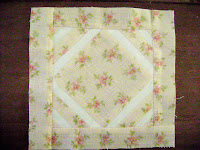 and this is D3 Jason's Jacks 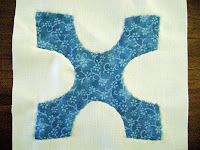 I have only about 6 more to do to catch up with the others who are doing the Baby Jane quilt.
I joined a bag swap a month or so ago and I just have to add some touches to my surprise part of the swap - can't show you a picky or will spoil the surprise for Donna. I must admit I quite like it so I might have to make another. 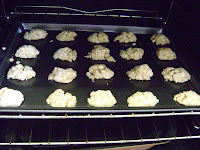 Saturday was an ideal day for inside so I cooked and sewed some more.
I was a day late but had been given this recipe for Anzac biscuits from my friend Vanessa and so decided to make some for church the next day. 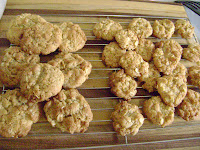 They turned out great - nice and chewy - just the way we like them. If anyone wants a foolproof recipe let me know and I will send it to you. If I can get it right then its a cinch for anyone as I can't cook that well.

Back to the sewing machine to finish another Baby Jane block and then to have a lovely cup of tea - would anyone like one - kettles boiled!!!!!!!!!

Yesterday while sorting through my sewing junk, in anticipation for my new sewing corner, lol.......I found hidden under fabric and more fabric................my sewing box from when I was a child and in it was a stitchery that I did when I was about 11, many many moons ago( about 30 odd). It is a bit rough but I remember doing it and getting the instructions from an encyclopedia, the fabric from my Aunt and thread from an elderly neighbor. My mum did not sew when I was a kid so I had to search all places for something to stitch and found on the bookshelf the encyclopedia with diagrams of how to stitch...........

Time has gone so fast, or it a least feels that way to me. I have been busy with reorganizing my sewing corner and its also school holidays as well, so with that comes lots of extra activities that can't be done any other time.But.....
I have been busy stitching and catching up on some sewing projects I had become behind in, I have caught up on the BOM stitching which Lynette Anderson has generously put online for free, just look here.
This is block 1- Rabbits 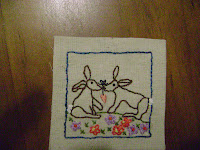 and block 2- Doves
( sorry about quality, had the camera on the wrong setting and did not realize until I uploaded it) 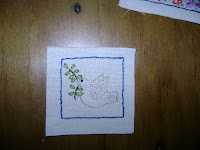 These are a cinch to stitch and can be done in an afternoon, and I am sure they will make an excellent quilt once we have finished, maybe a baby pressie or even a wall hanging................... have to wait and see.
I also received last week the Dear Jane pattern and wanted make a start on it as it looks so wonderful, so I thats what I did, make a start. I joined the Dear Baby Jane group who started about 6 weeks ago so I have been madly trying to catch up. If you are interested in starting one have a look here as you can get loads of advice on the way and also for me I can get to follow a plan of the blocks to do, that will keep me on track. I had to make 13 blocks to catch up so I made some of the easier ones and have started on the not so easy ones now, I have a plan to catch up within 3 weeks, that will be 18 blocks altogether...................I think I can, I know I can, I sew I can............. 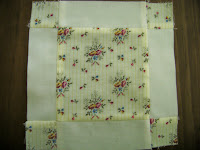 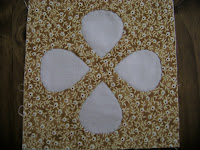 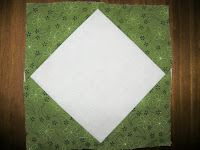 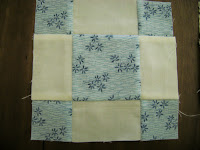 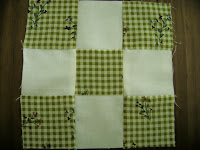 If you have got this far, thanks for looking, sorry its been so long
Until Next Time
Quilty Hugs
Posted by Dawn at 12:25 PM No comments:

Just a Short note - another surprise

This must be my week, yesterday I received a parcel full of wonderful goodies and today I received another parcel of goodies from Cathi. Chocolate, fabric, card ect....... 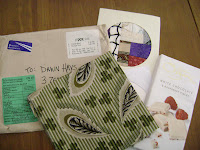 I am delighted, thanks again Cathi........ I also start to cut out some bags today for a swap I'm in and a spare.Cut the pink one out of some of the fabrics from yesterdays swap parcel........just so Pink..........delightful 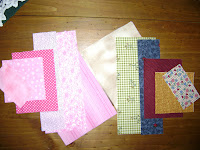 Surprise in the mail

Wow, today in the mail I received a parcel from my swap partner Little Miss Flossy.I owe you big time, this is what I received and I am so spoiled..... 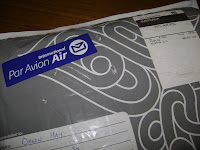 ... the fabrics are so gorgeous and the buttons and vintage laces are sooo..... wonderful, I love them......each little bundle was tied with a vintage lace or ribbon and with a little card with a button on it to tell me what the fabric was from or had been used for...... 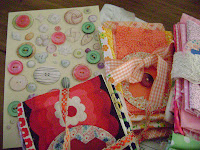 ...such a treasure.......
I do have some plans running through my head espacially for the fabrics from New Zealand.... 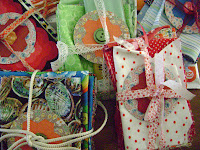 This is No 2 block and I am so happy with the progress of this. I would like to take the opportunity to give a big Thanks to all those wonderful designers out there who bless us with such wonderful patterns, it is such an intense job getting a pattern of the ground with all the details so stitchers like me can stitch away and finish a project without a glitch. I now understand the intensity of the planning, designing, stitching, pattern making stages, then finally finished project.
I still have a little way to go on the organizing of my sewing corner but stay posted for a Giveaway........maybe what won't fit........you'll be surprised
I also have one spot left for anyone who wants to join the PIF............. A great way to bless others and be blessed........see post from March 18th...................

Hope that everyone has a wonderful day.
Until next time......

Today is windy, wet and cold. I decided that I would have a bit of a clean up in my sewing corner, as my dearest mum has bought me a sewing cabinet to house my machine and bits,bits,bits..... It will arrive on Saturday and I want to move it in straight away. So........ keep an eye on this spot cos I will be GIVING AWAY some unwanted quilty bits, fabric & buttons once I have this all neat and tidy. For those of you who don't know me very well, I don't have a sewing room at the moment, it is usually the kitchen table or wherever I can find a spot to spill my things on.(I did have a sewing room but I was blessed with 2 much awaited little girls who needed it more than I did)
I was tagged today by Jo and have to tell you 7 weird/random/unusual things about myself, so here goes:

1. I failed sewing/home ec at school
2. I dislike cooking, would rather sew any day.
3. I talk in my sleep(so my hubby tells me).
4. I do not like the hot weather at all.
5. I love to eat breakfast cereal for tea ( my dad does as well - so can I say that's hereditary).
6. I am secretly scared of dogs and cats.
7. I am an avid Brambly Hedge collector and I love to watch the DVD's even without my kids.

Don't know if they are weird enough but will tag some others if you want to play along; Cathi, Lynette, Tracey,Little Miss Flossy
Hope you can play along,
Bye for now
Dawn
Posted by Dawn at 2:44 PM 2 comments:

I just love an excuse to have a tea party and I had a chance this morning to whip up some cupcakes, they are so yummy,lol.... 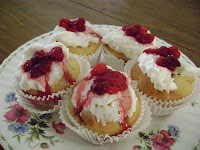 I only tried one, when it was still warm. They were quite easy to make, I just did a different icing to what the recipe said,but with the same delish raspberries.Hope to enjoy them with a cup of tea or two when son No 2 and hubby are home from work.........If I can wait that long to try another one, lol........
The weather here today is absolutely delightful, sun shining and a gentle breeze.........a great day to sit outside and enjoy the garden with my stitching in hand..........but housework calls first today. If you get time to have a visit to Lynette Andersons blog have a peek at her new designs that she has done they are so nice, and I think I could be persuaded to do some punchneedle after seeing these lovely designs. Also visit Gail Pan's to see her new blocks for her new quilt design, I love the Christmas Lily.
I will leave you with this thought for the day " We were given two hands - one to help others and one to help ourselves"
Have a great day
Quilty hugs
Dawn x x
Posted by Dawn at 1:33 PM No comments: