A little dream of sewing and an accident!

I was going to post on Friday and show you what I was going to finish the next day. Well all good plans sometimes get put on hold. In the afternoon while my babies were asleep I baked some muffins and planned the evening, sat down with a cup of coffee, notepad and pen. 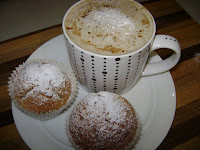 My husband and son go to archery on a Friday night, so I plan to have a peaceful night and sew, uninterrupted. After tea the girls and I headed out to visit my dad and mum, hubby and son headed out after me to archery. I had to drop of the pressie for my new nephew ( see earlier post) and have a catch up with my mum as she is heading over to Perth to visit her new grandchild Gabriel and my brother and sister in law ( wish I could go too).
I came home about 7.30pm with the girls and as I opened the door.... oh no......SMOKE... burnt food kind of smoke.....lots of it...everywhere...Yak......I didn't panic too much but was a little worried where I would put the girls while I investigated, and before I rang the fire brigade. We do have a fire alarm with new batteries that does work... Well I put them on the couch near the front door told them to sit, as the 2 yo is saying Oh Oh moke moke.....and came into the Kitchen.... and can you believe it.... the oven was the culprit... smoke billowing from it and I new that I had turned it off when I had made those muffins......BUT my son had noticed that there was a tray with 3 uncooked muffins in it... and had put them into cook before we had all gone out and not told me.... thought he was helping ... They were now black rock muffins...Lol...and I had to air the house out and wash some fabric things that smelt to much...... cos he was out at archery......we had a cold evening... thankfully the bedrooms were not effected and after opening all the front windows and door and kitchen window...... I put the girls to sleep and then cleaned up... but did not sew a thing...
Ah well next Friday is nearly here and I will try to sew then.... I am going to attempt a skirt for the girls out of this..... and maybe a summer dress...... 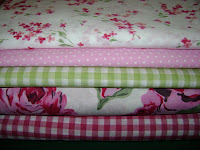 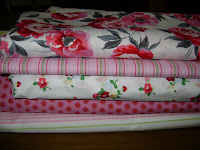 I will show you the end result when I finish them.
Until then,
Have a wonderful week,
Hugs,
Dawn x
Posted by Dawn at 8:00 PM

Hi Dawn,
Im glad the smoke was from nothing more serious.Would have been a bit cool having to air everything out.Love your fabric it will make some very pretty dresses, look forward to seeing the end result.
Take care and have a great week.

Ohh so glad it was only the oven life could of been very awful if not, sorry you couldn't mak eit this morning I managed not to spend too much!! I'm saving for an airfare at the moment..
Claire

Oh what an adventure life is! Sorry you missed out on a chance to sew, but glad nothing too serious happened!

Did you fix your old stuffed animals yourself or take them to somewhere actually called "dolly hospital?" I'm dying to know because my neighbor, I think, would be very interested in this! :)

Oh - where's the photo of the rock hard ones? Want to see how black and horrible those poor muffins look... lol.
So glad to hear that nothing more serious happened - thank God.
I bet your girls thought the whole episode was such a big adventure - as toddlers often do about disasters!

Oh my goodness Dawn! I am soooo glad it wasn't anything more serious than a little smoke! Sweetie I just wanted to thank you so much for your gorgeous give away! I finally got a chance to drive out to the post box today (which is about an hour drive from my house, crazy I know!) and your gift was waiting there for me. I LOVE love it! A very generous and beautiful surprise Dawn, thank you! Can't wait to see what you make out of the gorgeous fabrics in your post too! Hugs for you dear lady, and hope you're having a terrific week!
Amanda (aka Cottage Contessa)