I have been meaning to blog for a couple of weeks and have had some computer problems or should I say speeding problems. My downloading was going so slow and I had no idea why, I could go and cook a 3 course meal and still not have even Google loaded up....Lol, I thought it was the amount I was allowed on my plan to download but apparently not, but all is fixed now.
I had made a few of these over the years and was asked to write the pattern out for a friend. I had never seen one like this before so I decided to write the pattern to sell on Etsy. ( Available soon)
Well here is the full reveal of my first pattern.....
Now your iron will no longer look untidy in the laundry or kitchen like mine or when you are traveling to quilt class it won't be just chucked in your bag it has it's own carry bag. The peg bag can hang on the line or the wall of your laundry.
It is going to be available as a PDF pattern and normal pattern through Etsy in the next couple of weeks.
Here is a different colorway made by my dear friend Judy 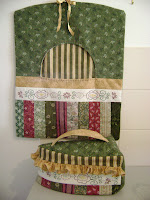 It looks so good in another color 'Well done Judy'.
Judy did the pattern as a trial for me and it coincided with a peg bag swap she was in with Tozz.
So the set was done in the color's Tozz had chosen and I presume to go with her Laundry.